So, catching up on the news a bit.

The 24th, my younger niece (not actually youngest niece, since I have several younger... Youngest Niece just kind of stuck to her) came by to return books and things and visit a little before making her Great Journey to College (she's going to that big fancy Arts Uni with campuses in Sac and Texas. yeah, the big bucks one).  One of the things that she brought was the joint project hat was going to be last year's winter/christmas/yule gift to Athena from her and I.  I had had a round mirror special made for her, eight inch round to be her own version of the 8 hand mirror (one inch per hand measure of the legendary sacred mirror of Amaterasu).  Her part of the project was to build a suitable and sturdy base.

Daughter loved this gift, especially as her cousin had incorporated into the base a shelf to present her offerings on, and a small nook below to place small sacred items for safe keeping or little objects to be purified, or switch the purposes of the nook and shelf, if she so desired.  This made it suitable to act as a stand alone custom kamidana for when athena is old enough to move away for college.  The base was left plain and unfinished so that either I could decorate/finish it for her, or for her to do herself and add her own qi.

Daughter decided that she wanted to decorate it herself.  Meanwhile, she would enjoy the beauty of the pine while contemplating how she would paint it to express her devotion and gratitude.

Current progress (she's a bit disappointed her attempt at rose petals turned more like a flat cut of those tiles with the embedded rocks, and her clouds aren't finished) 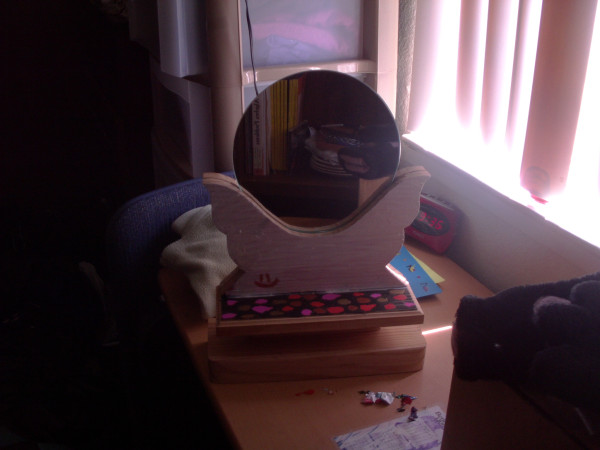 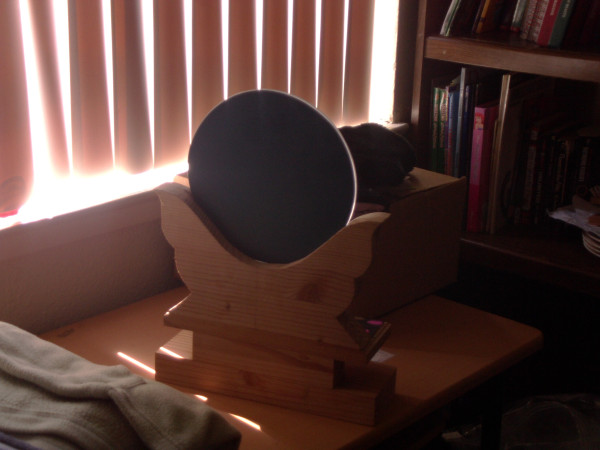 Yesterday, she came home from school sick, and though she spent some time on the computer, she also utilized her upright time (well, the part not involved with getting the legally required verification that yeah, he was ill enough to need to go home) to look up instructions on how to achieve the effects she wanted to try to capture in her painting of the base.  And then she also worked some on the base while resting.

Cream of potato lentil pea and bacon soup (with a little cabbage) also ended up getting made, and seemed to be more efficacious for her than chicken soup.  This made me glad that I have been keeping powdered goat milk on hand for cooking with.
Collapse